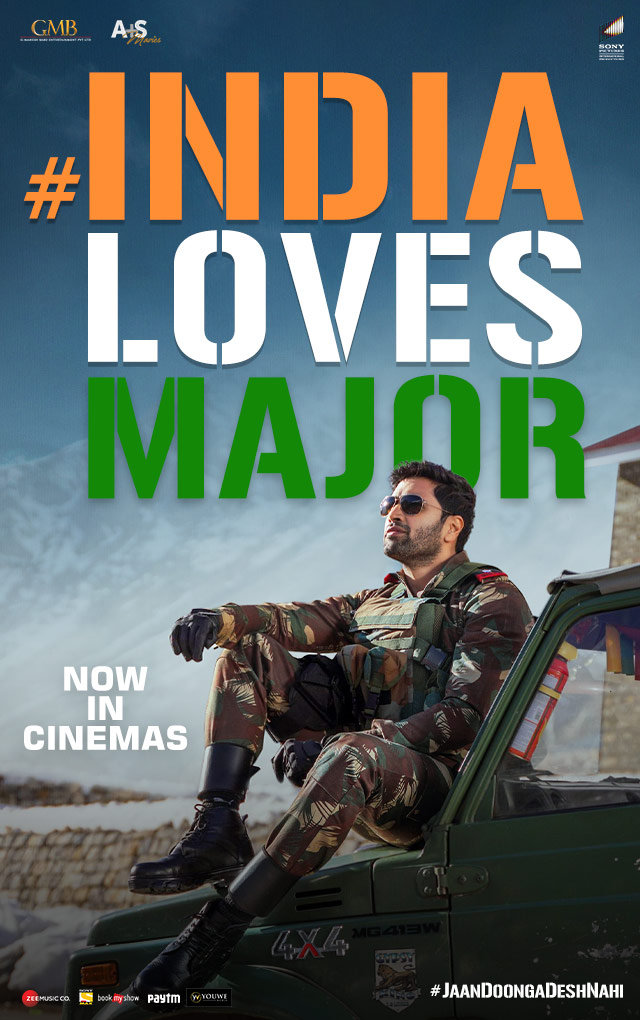 This film made on Slain Major Unnikrishnan  life and bravery. Excellent movie must watch for all.

As a child, Sandeep Unnikrishnan (Adivi Sesh) has only one dream: to wear a uniform (Navy or army). Initially, his parents (Prakash Raj and Revathi) are disappointed by his career plans, but they allow him to pursue this dream when they realize that he is serious about serving the nation.

After joining the army, he quickly becomes NSG commander and gets promoted to the trainer of commandos. He also gets married to his childhood buddy Isha (Saiee Manjrekar).

When terrorists attack Mumbai in 2008, Sandeep comes forward to lead the mission despite the fact that trainers don’t involve in operations. The rest of the film is his brave act.

Artistes’ Performances:
As Major Sandeep Unnikrishnan, Adivi Sesh delivers a fine performance. He shows a huge improvement in emotional sequences. His physique and body language fit well. Sesh holds the film entirely. Without a doubt, it is his best act.

Prakash Raj and Revathi are terrific again. Prakash Raj’s emotional speech is the highlight of the film, while Revathi’s breakdown towards the end is heartwrenching. Saiee Manjrekar gets her due finally. She was miscast in Varun Tej’s ‘Ghani’, but makes her presence felt here. Sobhita Dhulipala and Murali Sharma are effective in their short roles.

Technical Excellence:
Backed by big production houses like Sony and superstar Mahesh Babu, the team of “Major” spent money liberally to get a rich and superior look.

The production design and the cinematography are first class. In fact, they are a major strength. Sricharan Pakala’s background score is perfect. Abburi Ravi’s dialogues in the climax portion are superb.

Analysis
“Major” follows the life of Major Sandeep Unnikrishnan, an Indian army officer. Sandeep was killed in the 2008, when a terrorist organization carried out bombings and shootings in Mumbai on 26th November in Mumbai

A couple of films including Ram Gopal Varma’s Bollywood film and web dramas have dealt with the subject of the 26/11 attacks. But “Major” deals with the same topic differently by equally focusing on the life and progression of Sandeep’s career and his actual bravery during the 26/11 operation.

The makers (directed by Sashi Kiran Thikka with the script by Adivi Sesh) have divided the film into two parts – his life from childhood to his army career forms one part. The first half of the film is all about this. The later part of the movie is devoted to the Mumbai operation. The writer and directors have linked every incident in his life to his decisions as a soldier. Small incidents in his childhood and his teenage life had shaped his thinking.

At one stage of his life, Sandeep faces a question – What is it meant to be a soldier? He doesn’t have the right answer. Sandeep promises the commander that he’d live his life as an answer to his question. This scene reverberates in the line of battle when he leads the Mumbai operation. The two halves of the film are structured in that way.

The story has limitations as it entirely focuses on one man with a larger mission. Thus, the makers have tried dramatizing romantic episodes, and his early life for commercial reasons. But somehow, the first half of the film is not that effective, while the final portions are highly emotional and compelling.

As said, the film gets its mojo in the penultimate portions, and the drama heightens further towards the end. The final 20 minutes are terrific and riveting. You don’t leave the theatre without welling up with emotions.

The action, the performances, the dialogues, the patriotism feel…everything is synched well. Director Sashi Kiran Tikka shows finesse in handling the subject.

The action blocks in the final moments are terrific as well. The speech that Prakash Raj delivers is the icing on the cake. Unlike other movies, it is not preachy. “Sandeep should be not be remembered how he died, but how he lived,” Prakash Raj says. The film, no doubt, focuses on that part – his life.

Coming to its shortcomings, the focus on early life has slowed the proceedings. The predictable scenes between the wife and husband are stretched beyond a point. Some portions remind us of commercial movie traits. The episode of Shobita is not entirely convincing but added some value to drama. Also, the film paints the Mumbai mission as a one-man show, like a typical commercial movie.

All in all, “Major” is a perfect tribute to the brave heart – Sandeep Unnikrishnan. The film is all heart. Adivi Sesh and his team have pulled off an engaging biopic that rouses a patriotic feel.